Sinfonia (for Orbiting Spheres) is music in the shape of a solar system, a collection of rococo loops that twist around each other within a larger orbit. The word “sinfonia” refers to baroque works for chamber orchestra but also to the old Italian term for a hurdy-gurdy, a medieval stringed instrument with constant, wheezing drones that are cranked out under melodies played on an attached keyboard. It’s a piece that churns and roils, that inches close to the listener only to leap away at breakneck speed, in the process transforming the ensemble turns into a makeshift hurdy-gurdy, flung recklessly into space. Sinfonia (for Orbiting Spheres) was commissioned by the Los Angeles Philharmonic.

Musicians are listed in alphabetical order except for string principals. 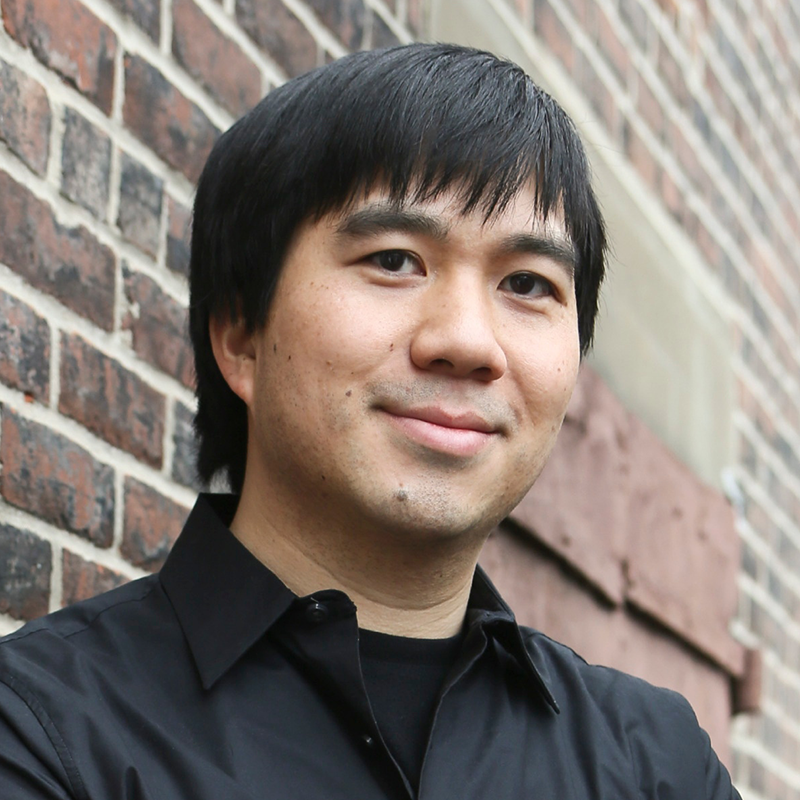 Mark Seto leads a wide-ranging musical life as a conductor, scholar, teacher, and violinist. He is Director of the Brown University Orchestra and Senior Lecturer and Director of Undergraduate Studies in Music at Brown University, where he teaches courses in music history, theory, and conducting. He is also Artistic Director and Conductor of The Chelsea Symphony in New York City.

Since Seto’s tenure with The Chelsea Symphony began in 2011, the ensemble has strengthened its commitment to new music by programming dozens of world premieres and establishing an annual competition for early-career composers; performed at Lincoln Center for the red carpet premiere of Mozart in the Jungle, the Golden Globe-winning Amazon Original series starring Gael García Bernal, Bernadette Peters, and Malcolm McDowell; and established a program to bring music to New York City correctional facilities, including Rikers Island. Recent highlights with The Chelsea Symphony and at Brown include an Earth Day concert at the American Museum of Natural History featuring Become Ocean by Pulitzer Prize winner John Luther Adams, performances of John Corigliano’s Symphony No. 1 in commemoration of Stonewall 50—WorldPride NYC, and collaborations with violinist Jennifer Koh and composer/pianist Vijay Iyer.

Seto holds a BA in Music from Yale University and an MA, MPhil, and PhD in Historical Musicology from Columbia University. He studied at the Pierre Monteux School for Conductors in Maine, where he served as an assistant to music director Michael Jinbo for two seasons. His conducting teachers include Lawrence Leighton Smith and Shinik Hahm, and he has participated in workshops with Kenneth Kiesler, Daniel Lewis, Donald Portnoy, Donald Thulean, and Paul Vermel. He is a recipient of the Yale Friends of Music Prize and has been honored with an ASCAP Morton Gould award.

The origins of the Brown University Orchestra date back at least to 1858, the year a “Grand Concert…accompanied by the Orchestra of Brown University” took place in Seekonk, Massachusetts. The modern era of the BUO began in the winter of 1919, when the College Orchestra was established. Renamed the Brown-Pembroke Orchestra in 1940, it became the Brown University Orchestra in 1953. The orchestra’s current membership consists of approximately 100 student musicians from Brown University and the Rhode Island School of Design. The BUO has given concerts at Carnegie Hall and Lincoln Center, toured China and Ireland, and performed with such renowned soloists as Itzhak Perlman, Navah Perlman ’92, Mstislav Rostropovich, Isaac Stern, Christopher O’Riley, Eugenia Zukerman, Pinchas Zukerman, Dave Brubeck, and Jennifer Koh. In 2006 Daniel Barenboim conducted the BUO during the first of his two residencies with the West-Eastern Divan Orchestra. The BUO has hosted Samuel Adler, Lukas Foss, Steve Reich, Steven Stucky, Joseph Schwantner, Michael Torke, Peter Boyer, Nico Muhly, Joan Tower, John Harbison, Vijay Iyer, and other distinguished composers-in-residence, and won 7 ASCAP Awards for Adventurous Programming of Contemporary Music. BUO alumni include current and former members of the Cleveland Orchestra, New World Symphony, Nashville Symphony, North Carolina Symphony, Chattanooga Symphony Orchestra and Opera, Spoleto Festival Orchestra, New York Philharmonic, Chicago Symphony Orchestra, and YouTube Symphony Orchestra.